I haven't had much time to blog since the turn of the year due to the ever increasing level of demand were experiencing, brewing/racking/bottling most week days & now most weekends it seems.

We are in a steep growth curve at present & to be honest I'm struggling to keep up, but I'm relishing the challenge. We're now brewing our core flagship IPA 'Diablo' at least once a week amongst other favourites like Zenith, Gambit, Barista & Teleporter whilst also developing new lines for bottle like our forthcoming new permanent Double IPA 'Maelstrom'. 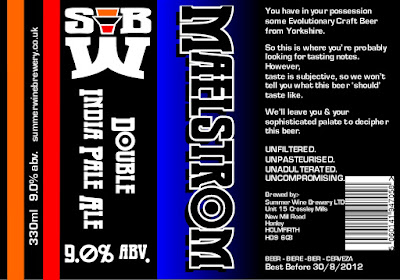 Specials have included our new 'Bravura' Pale Ale 5.5% which will be hitting the bottle soon, a well hopped pale ale brewed with exciting hops such as 'Super Alpha' & 'Motueka'. New session cask pale ales such as 'Origin' & 'Portside' hit the trade throughout January to be replaced with 'Galicoe' & 'Santo' during February.

Then followed a trip to the hop merchants to talk through our ever increasing hop requirements for the year, a trip down to see the guys in the shadow of the Malvern hills was always going to be a treat for hopheads such as myself & Andy. Some old favourites were rubbed along with some interesting new & lesser known varieties which we will put to good use throughout the coming year.

By the end of the month 'Bravura' & 'KopiKat' will be available in our online store & look out for some new exciting keg beers making their way around the UK, including a Milk Stout & others.


Also a date for your diaries is Saturday May 5th when we will be taking over the pumps & taps at the famous Cask in Pimlico, London. This will be our first meet the brewer in London & will be the official launch of the aged versions of KopiKat.  The Caol Ila & Clynelish versions will be available on keg along with Cohort Double Black Belgian RyePA, Maelstrom Double IPA, Anniversary Saison, Milk Stout, Diablo & more! Not to mention a large array of cask ales from our considerable range.

I will be making more of an effort to keep you guys in loop of what exciting new things we've got up our sleeves, but for now time to get some shut eye as an early brewday is on the horizon.