High Strength Beer Duty - Why the Government have go it so wrong.

If  you're reading this blog you most likely are aware of the introduction of HSBD (High Strength Beer Duty) this month, whereby all beer above 7.5% in alcohol will be levied with an extra 25% duty.

I've read lots of justified reaction on this poorly researched & knee jerk piece of beerophobic legislation, I would just like to add a collection of reasoning as why I think they have got it so wrong...

This is an excerpt from a BBC article back in February this year:-

"There is a received wisdom that we must be drinking more," says Neil Williams of the British Beer and Pubs Association (BBPA).

Its own figures, which are based on sales and not self-reporting, suggest alcohol sales peaked in 2004 and have fallen by 13% since then.

"In reality, we see a fairly deep-rooted decline in alcohol consumption which dates back to 2004. That's not something you see acknowledged in the media."

"It's frustrating that the true story is not getting out there", says David Poley, chief executive of the Portman Group, an association of drinks producers in the UK.

"With newspapers, the headline is always the same: 'Shock rise in binge drinking'. But you look at the figures, and you see alcohol sales are DECLINING".

"It's a myth that we need to make alcohol more expensive [to stop people drinking]. These trends are being reversed on their own."

Historically, sales of booze rose and fell with the economy. Recessions in the early 80s and 90s were coupled with a slump in drinking. And the current downturn is having a similar effect. From 2008-2009, alcohol consumption in the UK fell by 6%.

Despite perceptions people are drinking LESS.

But that decline started long before the credit crunch kicked in - 2004 according to the BBPA and 2002 by the ONS figures. So what happened?

THE HEALTH MESSAGE GOT THROUGH, THAT'S WHAT.

Alcohol concern state that despite falling alcohol consumption, alcohol related hospital admissions remain high, well if this is indeed the case and it is proven that the majority of the British public are drinking LESS despite the cost of alcohol reaching record levels. Surely the issue NOW boils down to the education of a minority who's behaviour is clearly & completely unaffected by price.

If what alcohol concern claim is true, then minority of problem drinkers remain unaffected by price.

More complex idea's like education & rehabilitation programmes are required in this area, the blunt instrument of tax is now longer working & is now only serving to punish those who do drink beer in moderation.

2) BEER IS NOT THE PROBLEM DRINK. 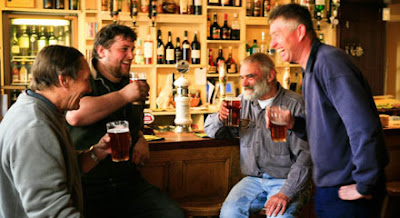 Beer is largely a low alcohol beverage & is largely consumed responsibly in a social setting, beer is not the problem in the UK, but the solution. Drinking moderate amounts beer has health benefits which are not widely reported, not mention the community setting of the pub where social drinking lends itself to this governments 'Big Society' ideals, government RHETORIC promotes it yet government POLICY (The Beer Duty Escalator) perturbs it! Go figure!

Community centres like the Great British Public House are allowed to suffer through increasing beer duty at 2% ABOVE inflation year on year whilst the government allows the social fabric of the UK to be undermined with cheap alcohol from the supermarkets, but if you can find anyone in Westminster with the appetite to go anywhere near this issue then Lucifer better stick the heating on.

The new HSBD beer tax SOLELY singles out BEER, our national beverage of which we have a proud world leading history & which is currently undergoing renaissance in the cask ale & craft beer market as the root cause of alcohol related problems. Take time to look & you will find we are a responsible industry who are trying to create jobs in an economic environment that desperately needs them.

So the government solution to aid our tax heavy industry?

Granted this poorly targeted warhead will increase the price of super strength four packs, but more worryingly it will attack the emerging creative British Brewing scene that is bringing a wealth of new beers to market that also sit in the blast zone, Imperial Stouts, Barrel Aged Beers, Old Ales, Double IPA's & more.

Not to mention the importers bringing these type of beers into the UK from the EU & North America who now face monolithic challenges to their businesses, the retailers selling these beers will no doubt see sales suffer & you the responsible law abiding beer connoisseur have to pick up the tab for poorly thought out legislation.

Talk about using a bolster chisel for a lobotomy.

There is no denial that these products will now become prohibitively expensive for some 'problem' drinkers but if the government believe that the people will simply take one look at the shelf edge label price & turn around & leave the store & stop drinking they are COMPLETELY DELUDED.

Instead they will move down the isle to cheap ciders & wines.

WHY? They are cheaper!

Why are they cheaper?

Lets go back to the supermarket where the 'problem drinker' has just seen the price of his super strength four pack, the government believe he will now walk away, WRONG!

Price has now become an issue for him but by not being overly concerned within which beverage his 'alcohol' is contained within, he trudges grumbling down the isle where a large 3 litre bottle of low cost cider catches his eye, £2.95! 'That will do the job' he says to himself.

Now surely if you are going to tackle problem drinks then surely you would make a level playing field for all alcoholic beverages ensuring they will all be taxed at a comparative rate, WRONG.

HSBD singles out beer, a widens the gap between beer & cider yet further, cider enjoys very low levels of duty in comparison with beer.

Beer has become the fall guy, when the reality is WE tidied up our act a long time ago, our now tax intensive businesses mean we sell our produce at price points that are no longer attractive at all to the alcohol fix seeking minority.

As alcohol goes with beer you get the least bang for your buck & have done for a long time, whilst cider & wine continue to seduce the problematic booze seeking minority in the price stakes.

The next time you see an 'Imperial Stout' fueled drain on society don't forget to write to Mr Osborne & tell him he got it spot on!

If you are going to aggressively attack the beer industry then put the entire alcohol house in order as we are sick of getting the negative press AND the tax bill!

Neither of which we deserve!

4) NEW LEGISLATION IS ACTUALLY A TAX BREAK FOR HUGE CORPORATIONS.

Coupled with the new HSBD was an attempt to sugar coat this bitter pill with the introduction of a new lower rate of duty for beers 2.8% or less.

Firstly smaller brewers like ourselves are not eligible for this lower rate as we receive SBR (Small Brewers Relief) but we do however have to feel the full force of HSBD.

So who will this lower rate reduction help?

The huge brewers who produce own brand low price bitters & lagers for the supermarkets. Also if they choose to bring their super strength beers in at 7.4% they will have received a tax giveaway during economic meltdown, no wonder some around the consulting table for the alcohol review welcomed the proposals.

Yet AGAIN beer above all other alcoholic beverages is demonised & attacked with the tax hammer when the truth is we are not, nor have been the problem for a long time now.

Time to wake up Westminster, the alcohol industry requires precision surgery & you insist on using a piece of flint to butcher us!

Maybe you should consult someone who knows what they are talking about, like Kate Fox, Director of the Social Issues Research Centre (SIRC).

She wrote a world of sense recently.

I'm not the only person who thinks you've got it wrong on Beer Duty, just take a read of the following:-

I'd like to take this opportunity to call upon CAMRA with its huge number of members, 130,000 at the last count to consider putting a full page advert in the next edition of What's Brewing to call upon members to sign this petition:- http://epetitions.direct.gov.uk/petitions/18346

If we can secure 100,000 signatures it will go back to Westminster for review.

Time to sit up & refuse to let our beloved beverage, beer keep taking the hit for broken Britain!

ENOUGH IS ENOUGH.
Posted by Summer Wine Brewery at 13:40

Great to hear (read) the facts from someone within the industry at the sharp end, just don't let it stop you doing what you do best mate, brewing a great range of beers.

brilliant read, most enlightening, thanks