The Key to Real Keg?

In the past twelve months the idea of Keg craft beer in the UK has been brought to the fore by several high profile craft brewers in the UK these include BrewDog, Meantime & Thornbridge. For so long a taboo in the UK craft market as it was seen to be too close to what the huge fizz producers did on the bars up & down the country.

Recently there has been a softening to varying dispense methods for beer in the UK, this seems to have appeared naturally along the side the growth of cask ale. There are now also a handful of progressive beer outlets in the UK who have fowarded the idea of guest beers appearing via keg & rotating on the taps just like guest cask ales on the pumps, examples include The Rake in London & The Sheffield Tap to name just two, & judging by the response they have recieved by pioneering guest keg beers it is surely something that has a role to play in the UK beer market.

Britain is the world pioneer of cask ale & champions this style & quite rightly so as it is hard to beat this method of dispense if executed correctly, i.e. correct glassware, correct serving temperature &  beer that has been nursed  into condition, bursting with life, cask ale really is hard to beat as method of dispense. But as the UK beer market has evolved keg has a method of dispense has naturally come to the attention of micro owners up & down the UK & during the past month I too have become aware of a new innovative method of kegging beer that requires no extraneous CO2 to dispense the beer in the keg the product to which I am referring is KeyKeg.

Available in 20 & 30 litre versions KeyKeg is a disposable plastic ball enveloped inside a cardboard outer, inside the plastic ball of the KeyKeg is a foil bag system into which the beer is filled, the video here demonstrates the inner workings of KeyKeg. The Keg can be filled either by filling it with ready carbonated beer i.e. beer with CO2 dissolved in it or can be filled with beer that has a degree of conditioning left to do once inside the Keg thus building up condition & pressure inside the Keg I believe this is a German idea which is catching on.

The most impressive thing about KeyKeg is that at no point during serving does oxygen or CO2 come into contact with the beer, compressed air or gas is pumped into the ball between the bag a ball causing a gradual collapse of the bag thus forcing the beer out of the bag & out of the open tap, at no point is EXTRA CO2 added to the beer, the dispensed beer contains only the CO2 added during packaging or that has occured through natural conditioning in the KeyKeg without oxygen, 'Real Keg' in my eyes. The greatest advantage for micros is that KeyKeg can be filled individually by hand in the brewery without the need for an expensive kegging line, see the video here. 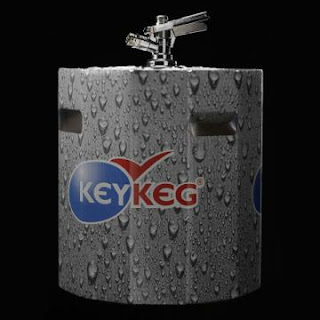 Now we all know CAMRA's hard line & almost papal view of anything that is not cask or bottle conditioned, well this product kinda falls between all CAMRA's governance as it IS keg dispense as the beer is pushed out & not drawn out via the suction created inside a beer engine, but at no point does extraneous CO2 enter the dispensed beer.  I saw a tweet from Kelly Ryan at Thornbridge the other day saying he was showing Stratford CAMRA around the brewery & he showed them the dispense technology of KeyKeg & apparently they were amazed by it, CAMRA members amazed by keg... I know, I thought exactly the same, but it may be that we have come across a product that CAMRA as an organisation may be able to credence within the trade in Britain.

However regardless of CAMRA's stance on such a product I believe this product has legs in the UK as it opens up 'kegging' to micros of all sizes & that can surely only be great for the consumer, the more breweries offering keg the more likely you are likely to see it on the bars of craft beer outlets up & down the country. I know BrewDog & Thornbridge are already using this technology to great effect. 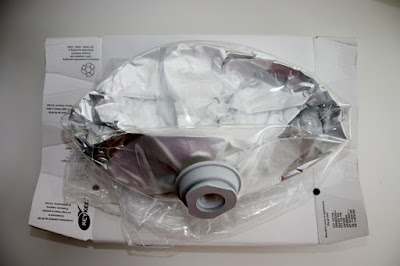 We for one will be taking delivery of KeyKegs & making our beer available for the select outlets that do rotate keg beers in their outlets. Some narrow minded people may see this as an attack on cask beer, not at all, it is our lifeblood as brewers, but it can SUPPLEMENT cask as a new exciting part of our amazing craft beer scene, cask will always be king in Britain but some very good sideshows like 'KeyKeg' may well bring craft beer to the masses who will still only for some ingrained reason drink from the font....

A diversion from cask... No, a new piece of the craft beer jigsaw in the UK...?

cheers for the mention. I like the principle behind the keykeg, a keg that is totally recyclable, I don't however like the packaging, the cardboard outer is not robust enough to withstand even rain and it's something the designers have to look at.
I will continue to use them regardless as some of the most innovative brewers around are using them. Doesn't mean I have to like it though!

Anyone knows if it´s possible to use a KeyKeg with a beer engine?

hello, I'm looking for a supplier of beer kegs.
I need a wholesale distributor. Something like keykeg beer container, can you help me?
I need a competitive price, I need an imitation of the original, something really similar for a better price.
please send me your pricelist to migliorfornitore@gmail.com
thank you