So you're probably aware we brewed an Imperial Vanilla Coffee Stout six months back & many of you have tried the un-aged version in a bottle of which we only have a few remaining. 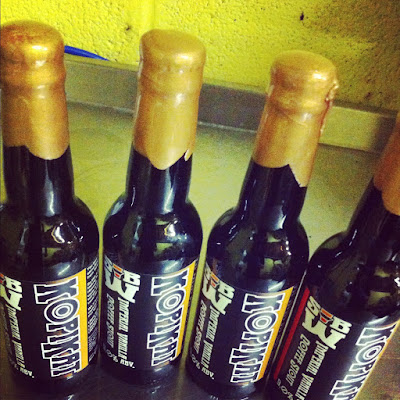 It's time to give you the full lowdown on this beer brewed back in October as it's time for the aged version to emerge from their catnap in two Scotch Whisky barrels where they have been purring away for six months. One a Caol Ila & the other a Clynelish barrel. Tomorrow they are being packaged for bottling & keg for our launch of the aged versions at our ambitious MTB at Cask on May 5th.

The beer brewed back in October with the help of avid London beer & food guru's @rickfurzer & @danielvane the beer took shape in the form of a double mash brewday, which involved a very early start, a monster grist & a few kilo's of world class coffee.

The idea for the beer was born back on IPA Day last year when we had an epic 'IPA Dinner' at the Dean Swift in London, designed by Rick, Max Chater (now Head Dog at BrewDog Nottingham) & Momo their talented head chef.

The malt bill was made up of 9 different malts, ranging from Pale Maris Otter to Roasted Barley & almost everything in between, the hops used were Chinook for backbone & Brambling Cross for flavour (no need to over-complicate big stout hopping) added to the boil was a good weight of Muscavado sugar, we had a mammoth four hour boil on this beer to make sure we hit all our numbers.

At flame out we eagerly waited for the temperature to drop sufficiently as not to damage what we were about to add. In went a large bunch of Madagascan Bourbon Vanilla Pods & as soon as we hit the desired temp in went the mammoth blend of world class coffee.

Kopi Luak or Civet Cat coffee taking pride of place after all it did provide the inspiration for the name, this coffee is the famous variety who's beans pass through the digestive tract of the Indonesian 'Civet cat', the enzymes in the gut of the cat change the nature of the bean making it less bitter & giving it a smooth flavour. The Kopi Luak, blended with Jamaican Blue Mountain, Old Brown Java & Kenyan Peaberry made up the rest of the blend.

After a carefully timed steep to extract just the desirable flavours of the coffee's we began the transfer of this huge thick coffee fueled wort over to the FV where we used a well known Chico yeast strain as we wanted as full a fermentation as possible so we wouldn't end up with a huge sticky cloying partially fermented mess. I wanted the beer to have huge complexity yet lots of drinkability & the yeast achieved that.

The day in itself passed quickly with Rick & Dan being so enthusiastic mash tuns were dug & cleaned quickly, beer racked, hops were weighed & different blends of the coffee where passed around for our approval, the conversation flowed & verbose opinions exchanged over many quality beers Rick & Dan brought along.

It was a great day & in the days after, communications were eagerly exchanged on the progress of which had become affectionately known as 'The Kat' we got a real sense that this was more than just a beer but a story, especially as Dan very kindly agreed to commission the artwork for the finished aged versions as he is a very talented artist. Huge thanks to Rick for securing the freshly emptied oak barrels for ageing the beer in & for his attention to detail & his well renowned super human palate capable of deciphering sauteed squirrel bollocks from twenty yards.

They sometimes say beer is about the people who make it & drink it & I couldn't agree more in this case. It is just such a pleasure to share something we had such fun, creating & nursing, with you. If you can't make it to Cask on May 5th, the two aged versions will be available in May.

Here's to many more beers like this we can share with you, because when you drink them you are a part of the story too!

We can't wait to hear your feedback on the barrel aged versions as of tomorrow the Kat is out of the bag...

Posted by Summer Wine Brewery at 17:31

Really can't wait to get hold of this, especially the Caol Ila version as one of my favourite drams.

Caused quite a stir round these parts has the Kat..

Awesome line up at Cask btw, wish I could join you

i hope i get to try all three of these, acework guys!